Learning to be the boss

An inimitable company culture has been one of many successes for the co-founders of design agency UsTwo. It's the stuff of dreams for most founders. Doing meaningful work with your mates in an exposed brick wall studio overlooking the heart of east London. But, they’ve learned that striking a balance between work and play goes beyond choosing the right beer fridge.

“Between us there’s probably one good, capable boss,” says Matt Mills, one half of the pair who started what has become one of the UK’s biggest independent design studios. It’s only now, after 13 years of growing UsTwo, that he and John “Sinx” Sinclair have started to describe the agency as their own. “We never set out to be a 300 person agency. We just wanted to do some work and see if we could get paid for it,’” says Sinx.

Mills and Sinx have been best mates since they were 11-years-old. If you were to compare them it would be hard to deviate far from their own description: Mills has the outrageous, far flung ideas and Sinx gets them done. “Mills would want to spend all the money in the bank tomorrow. I manage to keep some because we've got employees we need to pay,” says Sinx. “He deliberately does it to provoke … and we end up somewhere in the middle with something really good.” It’s a delicate skill to balance adventurous vision with the practicality to pave the road to get there. These guys seem to have mastered it.

The pair have developed an extraordinary company, in every sense of the word. Part design studio, part games studio and part startup venture fund, threaded together by a unique culture which they credit with much of their success. The offices are colourful, comfortable and playful, fueling an energy that encourages collaboration, friendship, and big ideas. They think of themselves as a “fampany” - a somewhat blunt portmanteau that demonstrates they are as much a family as they are a company. “We’ve displayed the best mates vibe the whole time and that’s rippled down and been the stimulus for the culture,” says Sinx. It’s resulted in some incredible work. Their best known game - the Escher-style mobile puzzle Monument Valley - featured in hit Netflix series House of Cards and netted nearly $15m in the first two years since it was released.

We’ve displayed the best mates vibe the whole time and that’s rippled down and been the stimulus for the culture.

Mills and Sinx studied graphic design at the tail end of the internet boom, graduating in 2000. Together they worked at a small design agency before branching off on their own to found UsTwo in 2004. After winning the Sony account they grew quickly to a team of 40 designers. Sinx concedes that they were able to ride past a lot of the challenges a five or 10 person company might experience - such as whether or not to hire more people or invest in a new office - because the contract gave them guaranteed annual income. But growing from a two person design team to a successful global design agency with a team north of 300 has been a steep learning curve, and hasn’t happened without their fair share of mistakes. The quick early growth in the business led to one of their first: “We left it too long to hire business support,” says Sinx who was left running most of the operational side of the business entirely on his own and with no experience.

Now 13 years into running a company they’ve promised never to sell, Mills and Sinx are planning to hire their first executive team. In the last few years they’ve realised that finding and hiring people who fit the values of the company is not the same thing as hiring friends. Maintaining the culture that’s core to UsTwo gets harder as you scale.

In the early days, a few rounds at the pub was the best way to hire. “We sat down in the beginning and realised that we're going to be at work a lot... let’s hire people we really enjoy being with and let’s design a place that we really enjoy being in,” says Sinx. What they ended up with was an office full of friends that centred around an intense work-hard-play-hard mentality. But, as they continued to grow, the roles they had initially hired for changed as quickly as the company grew. “When you’re a 10 person team you don’t need a full time finance person,” says Sinx, comparing the types they hired in their formative years to the talent they’re now hiring across the organisation. “It really changes as you grow with multiple studios around the world”.

And what happens when the company grows faster than the people within it? Things can turn awkward. “You have to tell people they’re not good enough anymore,”’ says Sinx, in a matter of fact way that shows he’s hardened from those conversations now but they still eat at him. He admits holding onto too many that they should have let go of probably ended up hurting the individual more in the long run. “When you keep someone in a business and they’re not progressing and learning and not doing what they could be doing in their life, you're actually doing them a disservice,” he says.

Hiring and firing is just part of the learning curve. “We've hired people the wrong way, we've got rid of people the wrong way,” says Sinx, who explains that one of their missions now is to do their best to help people they move on. “It’s not you it’s the company,” says Sinx. He recognises it’s helped the team evolve away from a feeling like “best mates” more towards one of colleagues with “friendship benefits”. There was a sense it wasn’t a comfortable process, but it certainly seemed necessary.

The last decade has been a gradual realisation of what a mature company really looks like. A part of that is coming to terms with being “the boss”, and it took for the team to call that out before they recognised that it wasn’t always helpful to be too matey. “I was having a serious discussion with one of the guys who runs another studio. He told me that we’re all mates which is why it's difficult to have hard conversations, but ultimately I’m his boss so I need to give some direction… I realised he was right,” says Mills.

I think we wanted to prove that you didn't have to shout or wear a suit to be the boss.

But Mills and Sinx are the polar opposite of what might be envisaged as the archetypal boss - and that’s exactly how they like it. “I was very driven by the idea that we could show anyone that we could do it even though we weren’t business trained. I think we wanted to prove that you didn’t have to shout or wear a suit to be the boss,” says Sinx. He wants the UsTwo Adventures startups to be inspired by this: “if those muppets can do it then maybe I can too.” 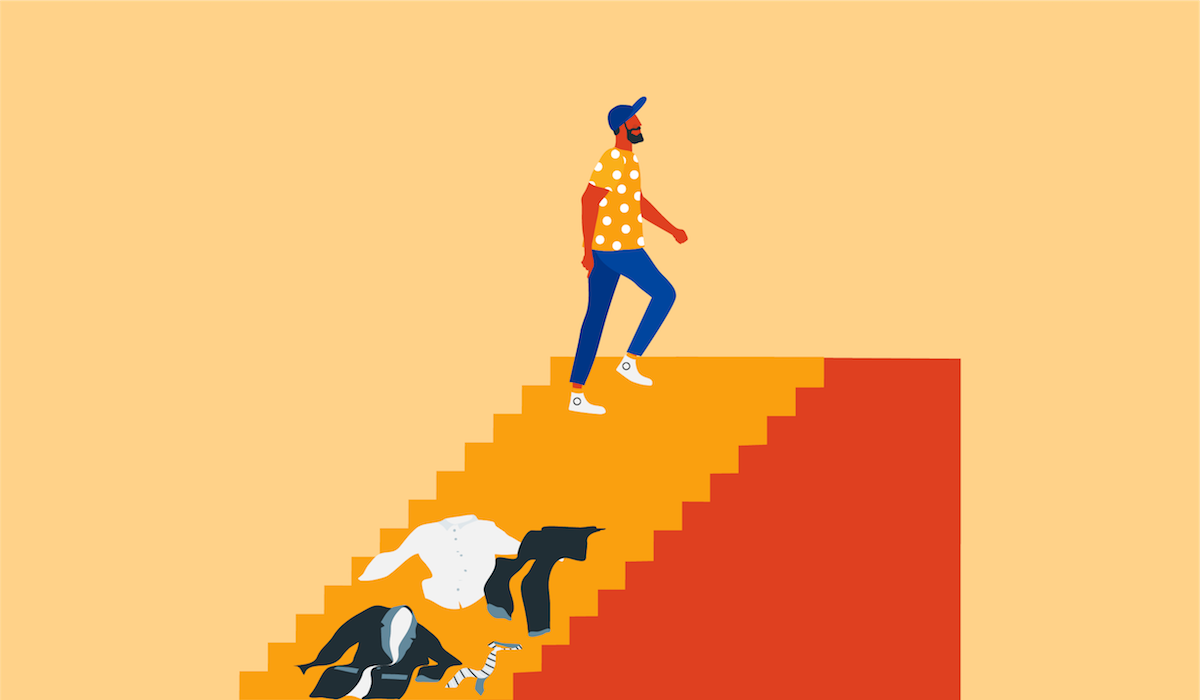 But he does admit that maybe they took it too far in one direction. “I thought our strength for so long was that you wouldn’t know we were the bosses, but I think that’s why we've had some of the issues we've had,” Mills says. A big part of this stems from the fact that they were terrified about losing talent. Particularly in the early days, when someone left it wasn’t like losing a colleague but like losing part of the family. Part of their “fampany”. But they’ve learnt to realise that people will come and go, and that’s not always a bad thing. Whereas they used to keep plans under wraps to avoid ruffling feathers, now they’re realising the value of good communication. “As we scale, our job is to communicate clearly and often, which has never been easy for us,” says Mills.

Part of the “fampany” ideals - and the fact that they deliberately avoided seeking status - has meant they were desperate to prove out that a business could be run without hierarchy. Mills and Sinx would give the same amount of attention to a teenager on a few weeks of work experiences as they did to a senior executive. They still believe it can work for a small startup but as they scale globally, giving attention meaningfully to more than 250 people isn’t possible. The conditions for a fully flat hierarchy to be effective require everybody’s performance to be constantly perfect. A nice dream. Their solution? Employ a leadership team that lives their same values and who can hold the torch across the different teams in different studios.

They are an extraordinarily endearing duo. While humble in their success and honest about their mistakes, it’s clear to them what they’ve got right. “If you hire people that are aligned with your own values you hardly have to do any work on the culture because it just happens,” says Mills. “You won’t get genuine culture unless it's ingrained within the people who built the business.” That doesn’t mean that business founders should give up on working on a productive, enjoyable workplace but he warns if it’s not authentic then it probably won’t work. “Don’t buy a ping pong table and a beer fridge and then assume your job is done.”

The reason UsTwo has thrived through highs and lows is because the pair have become mindful of their mission and the impact they’re trying to make within the business. “My favourite thing in the world is when I overhear someone else use one of our values in a narrative or a bit of story,” says Sinx. “That’s when you know things are starting to catch: when you stop talking about it. And 300 others do.”