Slow down. Find your pace. Then speed up.

Sophie Devonshire is the CEO of The Caffeine Partnership, a consultancy helping companies accelerate growth by focusing on purpose and pace.

Given Sophie’s demanding job and multiple engagements, we wanted to know her secret for managing her energy levels.

In our conversation, we’re covering entry-level rocket science, a hierarchy of decision-making, and why pace is more important than productivity.

Bang on the minute, I arrive in One Alfred Place, a stylish Fitzrovia co-working space masked by an unassuming, almost barren entrance. Once I pass the muster and raised eyebrows of the chilly receptionist, Sophie Devonshire’s cheerful arrival on the scene washes over me in stark contrast to the gatekeeper’s exacting gaze.

“Let’s sit over there - it’s so busy that elsewhere your voice recorder won’t stand a chance with all the surrounding noise”, she says jovially, grabs my arm and beckons me to a few seats in a sparsely populated area.

Unsurprisingly for a CEO of a successful consulting firm, Sophie is a master at making people feel at ease. In our case, this means that right from the start, she is the one asking me all kinds of questions. Short of telling her my life story, ten minutes later I remember that we’re meant to talk about her, specifically her approach to personal energy management. And so we switch gears.

Pace - the foundation of speed

Sophie talks about the idea of pace a lot, especially now that she is in the final stretches of writing her book “Superfast - How to Lead at Speed”. In interviews with various business leaders, the book explores the question of how to accelerate work.

The contrast jumps out at me - is it pace or speed we’re talking about? What’s the difference?

“Pace is a precursor to speed”, Sophie explains. Pace is a higher-level concept as it tells you when to speed up and when to slow down. In any long-term project, you don’t always have the same momentum. Like a conductor of a symphony, you have to know when to move from adagio to presto.

Sophie points to the fact that many businesses use space-related metaphors: Rocketship, dent in the universe, shooting for the moon. But one concept that they don’t apply as much is Max Q.

In rocket science, Q is the dynamic pressure that applies to an object launched into space. It’s composed of two factors: the surrounding air pressure and the speed of the vehicle. The point at which Q is at its highest is called Max Q, and space engineers devise the aircraft so that it is able to comfortably withstand Max Q. 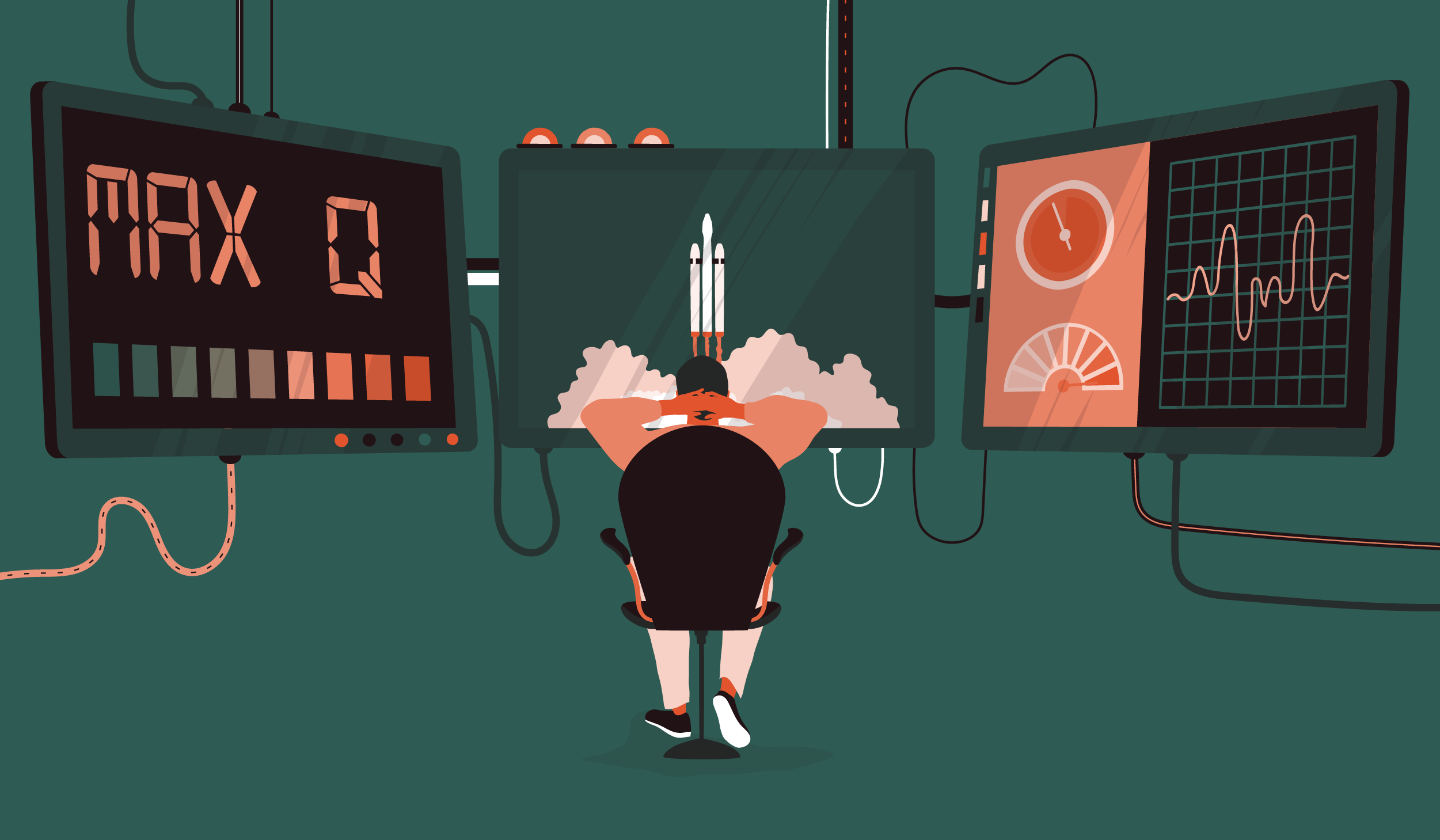 In business, we don’t spend enough time analysing when Max Q has been reached. Leaders push their teams to achieve more in less time, and get frustrated when things don’t work out.

The solution lies in working on your pacing.

One element of successful pacing is to always keep your purpose front of mind. If you are working towards something meaningful, you are better equipped to notice when Q is too fierce and could imperil your mission. When that purpose is lacking, and e.g. your main motivation is money, you’re more likely to keep accelerating until the rocket ship bursts at the seams.

Two people Sophie highlights that are great at this are Paul Polman, CEO of Unilever, and Sarah Wood, CEO of Unruly Media (both of who appear in Sophie’s book). Two things these two leaders do well are:

Slowing down has two variants.

The first is regenerative idleness - taking a break. Sophie says: “I once asked an agency leader what he would advise his younger self and his answer was ‘take more holidays’. It’s really important to take time off so that ideas can percolate and come together”.

The second is a deliberate, structured pause where you review how you’re doing. I propose the term meta-work, and Sophie enthusiastically agrees. Working on how you work. It’s when you ask yourself if your actions are aligned with your purpose, if all aspects of your business are in good shape and what you’ll do about those that aren’t.

“And these types of pauses don’t come naturally to anybody”, Sophie says. “Sometimes you have to force yourself to do them.”

Our key takeaway:
To pace yourself, your work needs to have a long-term purpose. You need to balance long-term and short-term thinking and, besides the obvious ingredient of hard work, you need to take regenerative breaks, as well as structured pauses where you review your progress and do meta-work.

The hierarchy of getting the right things done

Sophie has had a varied career, starting in big corporate, founding and successfully selling an e-commerce company and running it from Dubai and Tallinn where she moved with her husband. Upon returning to London 2013, she took the job of CEO at Caffeine. Obsessed with productivity and efficiency, her focus has shifted towards pace and energy management, and ultimately, purpose.

Why the move away from productivity? “Productivity in a team context feels like squeezing things out of people”, says Sophie, whereas the idea of pace “feels more appropriate for people-centered business.” 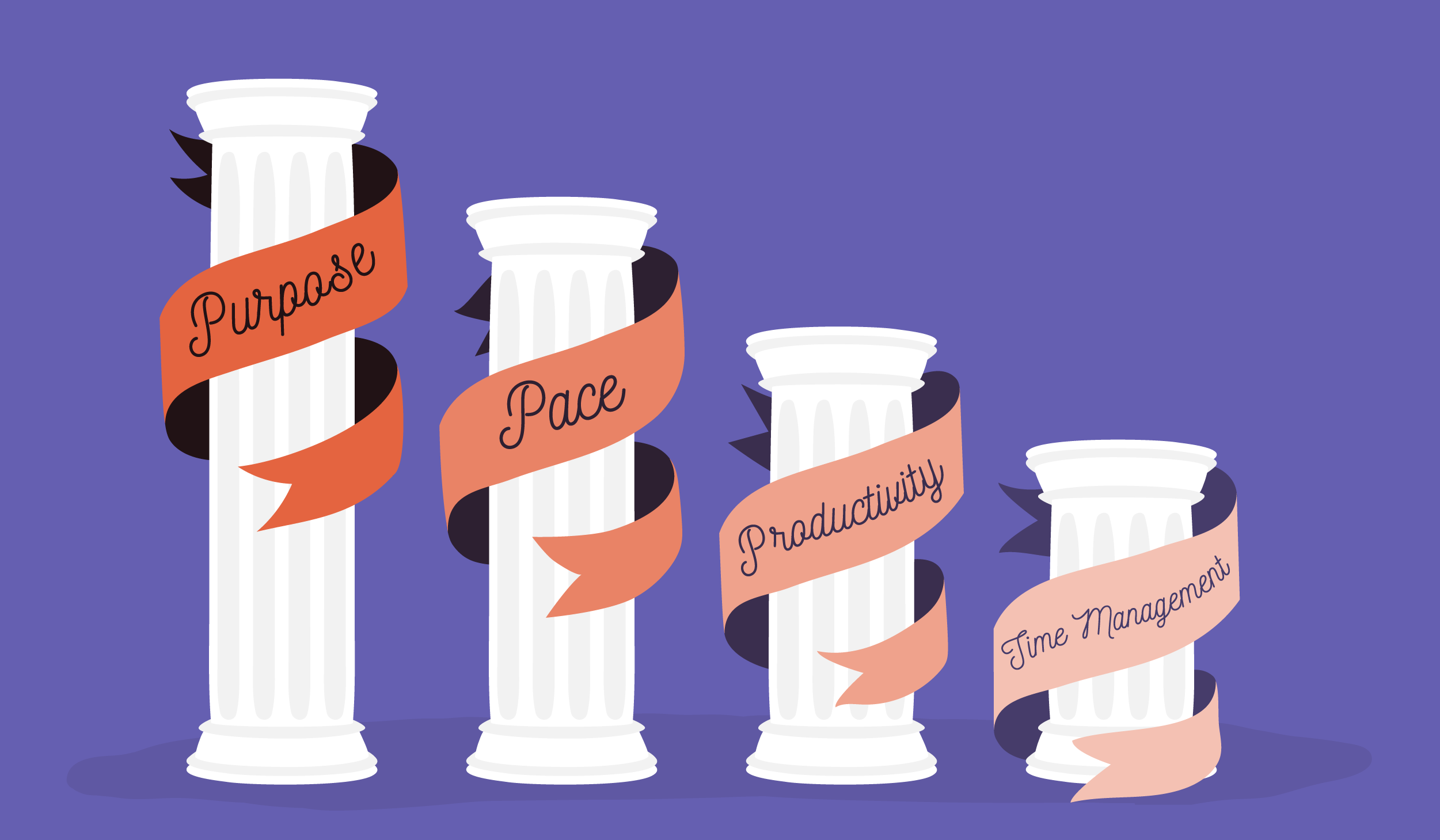 Pace and Purpose are higher-order concepts above Time Management and Productivity. They remind us of Peter Drucker’s wisdom in distinguishing efficiency (doing things right) from effectiveness (doing the right things).

Purpose tells you what you want to achieve and why. It drives pace. Pace, in turn, gives you a rhythm. It tells you when to focus on work, when to take a productive break, and when to rest. Productivity then works on maximising your output, for which time management is one ingredient, next to others such as focus and quality review.

Our key takeaway:
When you map out your plans for a project or implement your new year’s resolutions, make sure you answer the purpose question first and figure out a pace that is realistic to maintain. And only then start thinking about productivity. Doing it the other way round is putting the cart before the horse.

And when you are at breakneck speed…

We’re almost out of time, but I can't let Sophie go without getting some productivity best practice tips.
Graciously conceding that this is, after all, what she has been immersing herself in the last few years, Sophie gives me her top five:

Focus. Warren Buffett has a “not to do list”: Order your top 25 life goals by priority, and then cut off the bottom 20 and don’t do them until you get the top 5 done.

Batch things. If several people ask for your time, think whether you can run an event where you do something of a Q&A.

Use the stack. Before you reinvent the wheel, try to think whether you can leverage something that has been done before. Sophie mentions a case of an entrepreneur who wrote a long blog post about his journey. When people reach out to him for advice with their own projects, he asks them to read the post, and to come up with questions that the article doesn’t answer. Another type of stack usage is templates: Use smart templates for emails you write over and over again.

Become a person of candour. And, if you lead a team, build a candour culture. Sophie mentions how one of Caffeine’s prospective clients was concerned that she, being British, would be too polite and not straightforward enough with their team. So it’s key to understand “how you can be direct without being an arsehole”, as she puts it. If you create a culture of candour, it helps speed up all your work because you don’t have to clarify what you said and won’t get involved in projects that are outside your interest.

Learn how to say no - Having a vast network and running a successful service business, Sophie is bombarded with meeting requests, ranging from important to utterly random. If she said yes to all of them, she wouldn’t get any work done nor give her husband and daughters the time they deserve. So how to say no? “Running my business from Estonia was a revelation because I couldn’t meet London people for coffee. And you know what? A phone call actually works pretty well!”, she says.
But she’s in London now. So what’s her recipe these days? “Try to be courteous and polite about it - say I’d love to meet you. But this week is going to be tricky, can we schedule a phone call to start with?” Manners are really important for Sophie. Just as a matter of principle, but also because it’s a small world, and treating people poorly will come back to haunt you.
Contrary to most people’s fears, giving someone a gracious no will actually have them respect you more than the typical “that’s interesting, let’s stay in touch”, and then ignoring their emails, as is a frequent custom in the UK. Sophie says: “Everyone prefers to hear Look, I love your idea, but it’s just not going to happen. Sorry.”

Smugness wins in the end

What has worked best for Sophie in terms of her own energy management? “It’s a boring answer”, she says laughing, “but it’s exercise. I used to treat it as an indulgence, and didn’t do enough of it because just being healthy and not getting fat weren’t motivating me enough. But when I discovered that it was the thing that energised me, I completely fell for it.”

How to make that switch happen? Discover your type of exercise. “I always found the gym boring”, says Sophie. “But when I discovered bootcamp, I was sold. I do it in a park near our place. It’s with people, it’s early in the morning, and you get to feel smug all day. What’s not to like?”

As we walk towards the exit, I remember a piece of advice Sophie gave in another interview I read: Solvitur Ambulando, which means: things get solved while walking.

Why is it useful to do meetings afoot? Sophie says that, apart from the obvious benefit of movement, “it’s because you don’t face each other, so you can allow for pauses in the conversation. And you can have more difficult conversations.”

I’m glad she says this while standing still, facing me.

And so we say goodbye - Sophie hugs me cordially and melts back into the industrious elegance of One Alfred Place. Waiting for the lift, I check if the receptionist has warmed to me. She hasn’t.